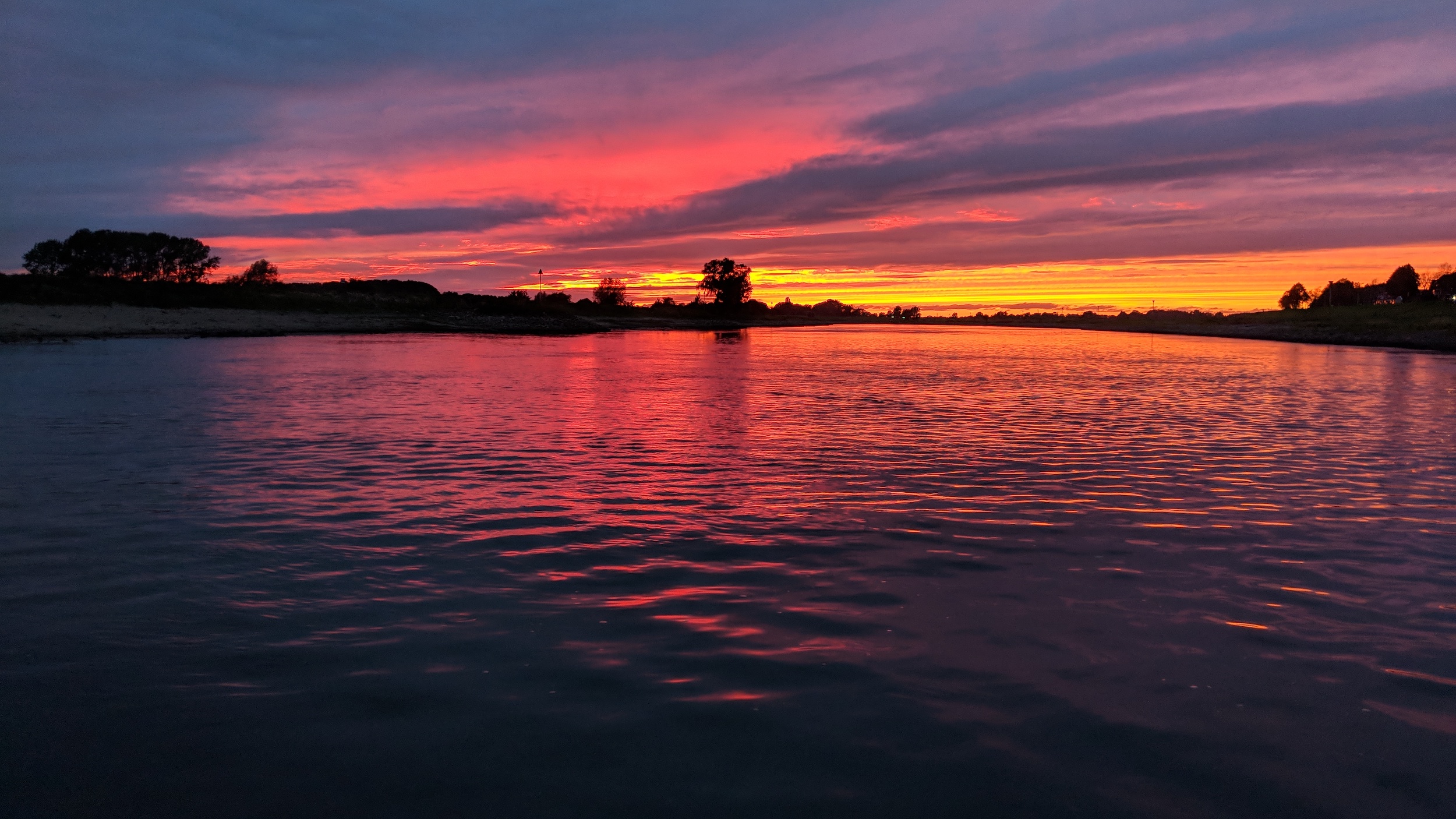 More and more our fishing updates shift to the worldwide and pretty much “instant fishing network” called Facebook. The disadvantage of this instant network is that news becomes old news and then forgotten news in just a couple of days. Good articles need an infinite lifespan and for that a website just suits best. I was in doubt what language to use for this specific article but since I had quite some interesting conversations with fishermen worldwide about the subject, I just decided to do both. English version can be read here.

Totally unexpected I won an amazing price. A 5 day GT Fishing trip to the Andaman Islands, given away by Gamefishing Asia. A fishing report of this trip will follow in the near future, but I will start off with an integral part of the preparation for this trip.

With only three months before departure to the Andaman Islands, I immediately started the search for the right gear. Rods, reels, lines, terminal tackle and… Lures!

GT Lures do not come cheap and since I always like to create/build something myself (okay, and I’m Dutch…) I decided to try and make a GT popper for this trip. At a Dutch message board there was some talk going about using 3D printers for making lures and that seemed to be very interesting for what I wanted to make. I came in contact with Erwin Boers, owner of Filament-shop.nl, who had printed some lures for Northern Pike already and after his enthusiastic reaction we decided to take on the challenge together.

Key features of a GT popper:

The last seems very obvious but happened to be not as easy as thought, in combination with the second key feature…

As I use 3D Modelling software for my job on a regular basis creating a popper design was easily done. I decided to go with a 4 by 5 centimeter cup with a round shaped upper part and pulled the lower part down to make a bit of a V shape, which in theory should scoop more water in choppy sea conditions, instead of skipping over the surface.

The inside of the popper came out to be a lot more work than I expected. With the material (PLA Filament) having a density of 1.240 kg/dm3, being heavier than seawater (1.025kg/dm3), it was time to call in Mr. Archimedes, who made a law on that subject plenty years ago.

First thing to work out was the through wire system. Stainless steel or aluminum? Weight wise, 7.850kg/dm3 versus 2.702kg/dm3, I chose the last option, hoping that it would be strong enough. A 2mm thick solid “though plate” system should do the job. I made the design within the 3D software, since “the negative” of the plate should be subtracted from the popper body.

When the form and inside took shape we defined the infill rate of the body to be 40%. That should give enough buoyancy for the popper, to carry the weight of the aluminum frame, 3 split rings and 2 5/0 Owner ST66 trebles, weighing 11 gram each. After some fine-tuning I made the print files and now it was Erwin who came in action. 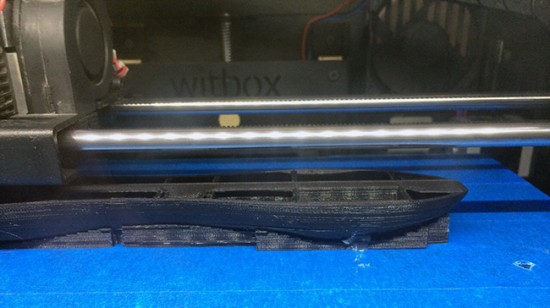 The aluminum frame was cut out by a CNC machine and the 3D printer did the rest. The great thing about such a printer, is that it is so ridiculously precise, that you can literally print everything you want without margin and it will fit! Halfway printing of the popper body the printer stops. This is the moment where you put in the aluminum frame and in our case also two stainless steel balls for rattle/ long cast purpose. After that you proceed the printing and the 3D printer will do the rest.

Half way the printing process

With the first 3D printed GT Popper being a fact I was extremely curious if everything turned out to be as expected. Well, it didn’t… It happened to be leaking and sinking, so… Back to the drawing board.

Back to the drawing table

Good thing was we now could weigh the printed lure and check it against our calculations. The infill turned out to be a problem, making the popper to heavier than expected. So, out went the infill principle. I also was not entirely happy with the shape of the popper and decided to start making it bigger. After that a worked on the inside of the popper again giving it a “ship like” structure with frames, decks and bulkheads. Everything in between became air chambers for buoyancy. After some calculations, 2mm wall thickness for all PLA material should be the optimum, taking into account buoyancy as well strength.

In the meanwhile I abused the sinking popper with a hammer, screwdriver and whatever I could find, concluding that this version already was incredibly strong. The new version should be even stronger in theory, so that gave quite a lot of confidence being it GT proof. Weakest link in my opinion? The aluminum frame.

Only one week before departure I received the new and improved version. I tested it and was stoked to see that it was watertight, floating with everything attached, super strong and best of all, it had a superb popping action! In advance I took some extra margin in the weight calculations and while testing I came to notice that the popper could carry 15 grams more weight with ease, so a stainless steel frame now became a feasible option for improvement. This will be something for a next trip however. First it was time to go pack and test this popper to its limits.

Those limits were reached during the final day of our trip. After more than 50 GT attacks, of which many followed by some of the most extreme fights I ever participated in during fishing, I lost 1/3 of the popper. Strangely it had split over the long side, which was about the last thing I would have expected. In my book this is still a big success, since the other GT lures we used, ranging from 25-100 dollar, were in no much better shape, being stripped from their coating and doomed to suck up water and sink. 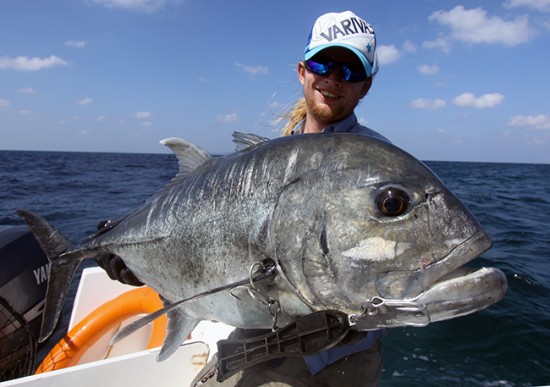 The aluminum frame turned out to be strong enough, although it had twisted a bit during one of the fights. With GT’s up to an estimated 17 kilos caught on this lure and the margin in floatation, next poppers will be printed with stainless steel frame, just to be sure. 17 to 60 kilo GT is still a long way… 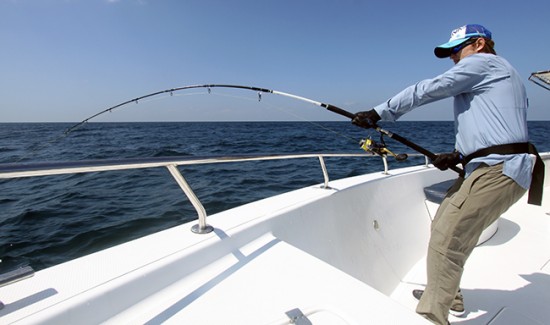 At the moment we think we found a solution to the splitting problem, which would make this popper pretty much indestructible. No GT was able to put more than a scratch into the PLA material, whilst they were able to bit chunks out of tropical hardwood. To me this was the biggest achievement, seeing that a 3D printed lure has a lot of potential for this type of fishing.

I guess they liked it… 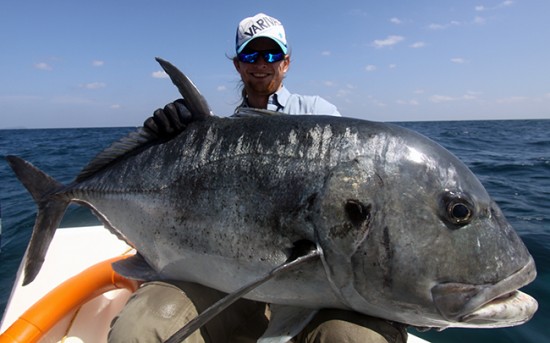 That feeling when the first GT nailed this self-designed lure. That feeling when at certain periods this popper out fished other lures in number of takes. That feeling when that 17 kilo GT made the water explode and, while giving it hell, was not able to break the lure nor the aluminum system. Those feelings combined put a smile on my face that lasted for several hours. It made an awesome trip even cooler and I’m already thinking about new designs for the future. Poppers, stickbaits, possibilities are endless and… Very affordable! This is lurebuilding 2.0 for sure!

For more information, please visit filament-shop.nl or check out their Facebook page filament-shop. Should you wish to purchase one or more GT3D poppers, do not hesitate to contact me via Facebook or the reaction system below. When demand is high enough, we might print a limited number of poppers for sale.